The role of artificial intelligence and data mining in cybersecurity

The rapid development of information technology has prompted many industries to depend on network connections for sensitive business operations. However, these networks have become more vulnerable than ever to cybersecurity attacks. According to Cybercrime Magazine[1], the cost of global cybercrime is expected to hit $6 trillion by the end of 2021. This figure is predicted to grow by 15% every year, reaching $10.5 trillion by 2025. Clearly, the cyber-attack surface in the modern world is massive and continues to grow rapidly. This raises a question about AI in cybersecurity. What’s the role of data mining and artificial intelligence in cybersecurity? Let’s find out!

Looking for solutions for your company?          Estimate project

What is artificial intelligence?

As you know from other posts on our blog, artificial intelligence (AI) is a branch of computer science that allows machines to learn from experience and perform tasks that usually require human intelligence. AI consulting has grown to be very popular in today’s world and greatly impacts the quality of lives we live.
The intent behind this technology is to enhance human capabilities and contributions, not replace them. This makes it a valuable business asset. Before we switch to the role of AI in cybersecurity, let’s concentrate for a moment on another AI-related technology–data mining.

What is data mining?

Data mining is the process of sorting through large volumes of data to find anomalies and identify patterns and relationships that can be used to solve diverse business problems. It can be used by organizations for everything from fraud detection and filtering to learning about customer interests. Therefore, we can say that data mining can be very useful in terms of cybersecurity.

Data mining uses various techniques and algorithms to turn huge volumes of data into useful information. Below are some of the most common techniques. Many of them are frequently used in cybersecurity as well: 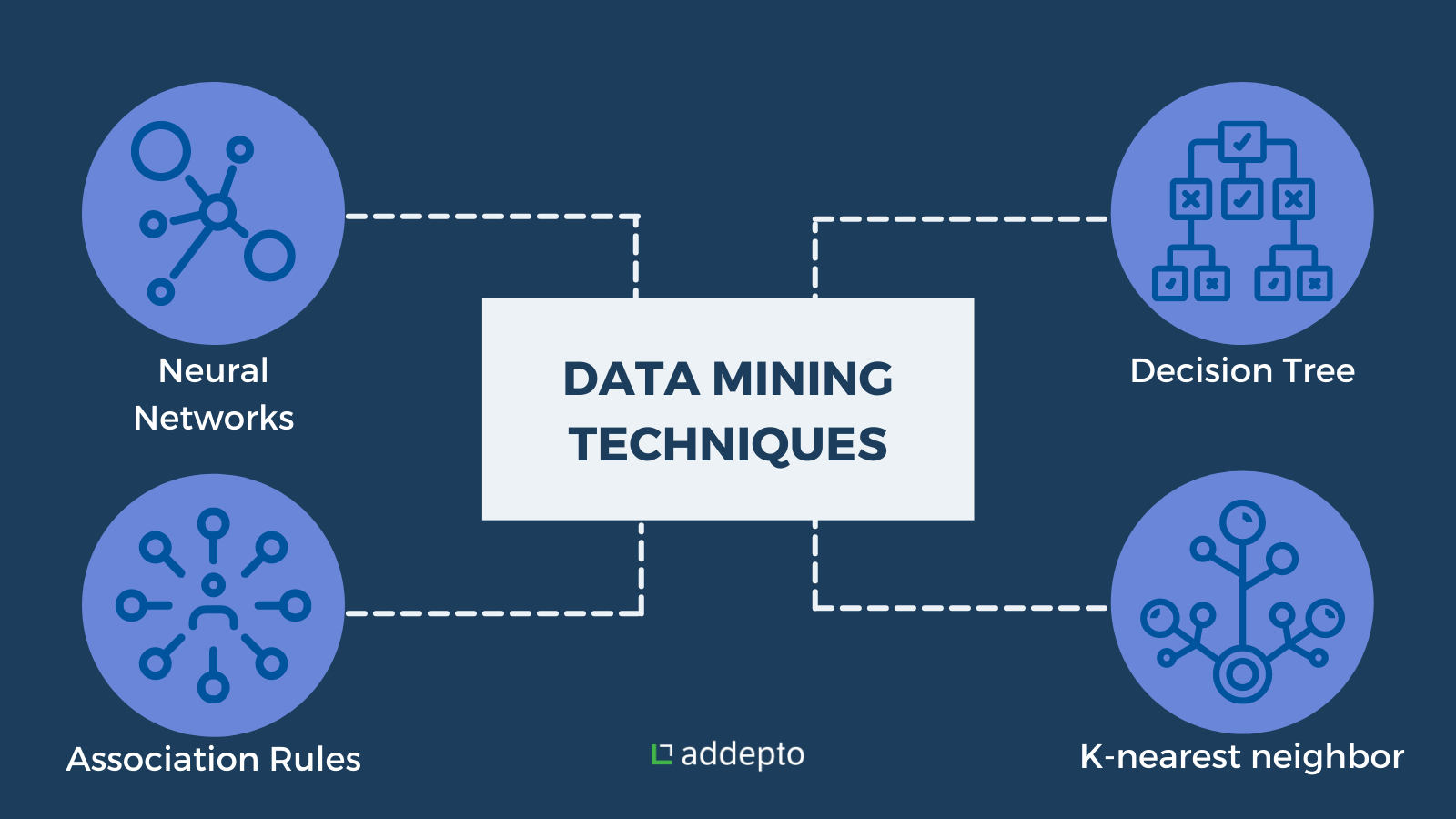 • Neural Networks: A neural network is also known as artificial neural networks (ANNs), or simulated neural networks (SNNs). It’s a series of algorithms that seeks to recognize underlying relationships in a set of data by using a process that mimics the way a human brain works.
• Association Rules: This is a procedure that aims to observe correlations, frequently occurring patterns, or associations from data sets in different kinds of databases. Most data mining algorithms tend to be mathematical because they work on numeric datasets. But association rule mining is non-numerical. Organizations mainly use it to determine the relationships between different products and understand the consumption habits of customers.
• Decision Tree: This data mining technique uses regression or classification methods to predict or classify probable outcomes of a series of related choices. It allows organizations to weigh possible actions against one another based on their probabilities, cost, and benefits.
• K-nearest neighbor (KNN): K-nearest neighbor is a simple and easy to implement machine learning algorithm used to solve regression and classification problems. This algorithm is intuitive and easy to learn. It assumes that similar data points are found in close proximity to each other. And as a result, it seeks to calculate the distance between given data points. Some of the most common areas where the KNN algorithm is used include credit rating and loan approval.

It might be also interesting for you: Building a data lake on cloud (AWS, Azure, GCP)

Applications of data mining and AI in cybersecurity

A huge chunk of internet traffic today is made up of bots. Bots are software applications that perform automated, pre-defined, and repetitive tasks much faster than human users do. Some examples of bots include:

• Chatbots: These are bots that mimic human conversation. They respond to certain phrases with programmed replies.
• Social bots: These are bots that operate on social media platforms.
• Web crawlers: They are sometimes called spiderbots. It browses through the web pages on the internet with the aim of web indexing.
While some bots are useful, others are programmed to gain unauthorized access into user accounts and perform other cyber-crimes. These are called malicious bots. To carry out these attacks, malicious bots are distributed in a botnet. This means that copies of the bots are distributed across multiple devices, usually without the knowledge of the owners. If the devices are located in different IP addresses, it’s difficult to identify and block the source of the malicious traffic.

But with the help of AI in cybersecurity and data mining, it’s easier to build an understanding of the web traffic and differentiate between good and bad bots. One of the biggest evolutions in malicious bot detection is the shift from trapping to hunting. In threat trapping, technologies identify malicious bots by using models of bad behavior, for example, signatures. If a malware signature is specified in an object, then that object is regarded as malicious.

But threat hunting is the complete opposite. It uses good behavior models to search out malicious activities that do not match the models. If you can model what’s good, you can always identify the bad because everything that deviates from good must be bad.

Without the use of AI in cybersecurity and data mining, performing good behavior modeling would have been impossible. The whole process involves collecting and analyzing huge amounts of data, which requires out-of-the-ordinary processing power. And because behaviors aren’t constant, behavior modeling is a never-ending job. This means that it’s virtually impossible to perform these tasks manually.

The first step involves extracting, capturing, and characterizing features such as n-grams, API calls, program behaviors, and binary strings in file samples. This can be performed by running dynamic or static approaches. A hybrid approach that merges both dynamic and static analysis can also be used.

Aside from battling malicious bots, data mining and artificial intelligence can be effectively used to detect intrusions and potentially malicious activities. Traditional software systems get overwhelmed by the sheer number of malware created every week, making it hard for them to detect new threats in real-time.

But AI in cybersecurity and data mining use sophisticated algorithms to run pattern recognition and detect behaviors of malware attacks before they enter into the system. Malicious attacks may include intrusions into databases, networks, servers, operating systems, and web clients.

Intrusion detection systems (IDS) are used to detect anomalies before hackers can do real damage to a network. They work by looking for deviations from normal activity or signatures for known attacks.

An IDS can either be implemented as a network security appliance or as an application running on customer hardware. There are also cloud-based intrusion detection systems that protect data in cloud deployments.

The use of data mining and AI in intrusion detection systems

Data mining extracts appropriate features from huge sets of data. And it supports different learning algorithms such as unsupervised and supervised learning. Remember that intrusion detection is a data-centric process. Therefore, with the help of data mining algorithms, intrusion detection systems are able to learn from the past and improve performance in finding unusual activities.

Many IDS systems are AI-based. Threats tend to evolve dynamically, becoming harder to write a set of rules for machines to follow. This is where AI comes in to handle the writing of the ever-changing rules.

Hackers have found a way to work around the traditional approaches of securing endpoints. They use machine learning and AI in cybersecurity to deploy sophisticated attacks, shortening the time to compromise an endpoint successfully. These new attacks are in the form of file-less malware, which manipulates the normal endpoint processes, and phishing attacks that take advantage of human mistakes to get past the perimeter. They are becoming more prevalent than ever.

Below are some of the ways in which AI and data mining can be used to improve endpoint security:

• Through supervised learning algorithms, data mining can be used to determine when a given application is unsafe to use so that it can be kept away from production systems. Based on containment and security rules, these algorithms block the dangerous actions of an application. They are also responsible for the definition of predictive analytics that gives insights into the extent of the threat that a given application poses.
• The use of AI in conjunction with security information and event management (SIEM) enables organizations to predict, detect, and respond to anomalous events and behaviors in real time. AI makes it possible to analyze and correlate all activities recorded within a given IT environment. LogRythm, for example, has developed an interesting approach of integrating SIEM, AI, and machine learning to its Logrythm Nextgen SIEM Platform[2], enabling it to automate the process of analysis and correlation of the activities that take place in its IT environment. This enables it to gain new insights in securing endpoints across its networks.

What are the best tools for artificial intelligence in cybersecurity?

Below are some of the tools that leverage various data mining and artificial intelligence algorithms to offer the best security to organizations:
• Sophos’ Intercept X tool: Sophos is a British company that specializes in hardware and software security. Its intercept X tool is an excellent malware defense solution for organizations of any size. It uses a deep learning neural network that mimics a human brain to retrieve millions of features from a file and perform an in-depth review to determine whether it’s harmful or benevolent.
• Vectra’s Cognito: Vectra’s Cognito uses AI technology to detect attackers in real-time. It gathers cloud events and network usage data and uses behavioral detection algorithms to unmask hidden attackers in IoT devices.
• Darktrace Antigena: Darktrace Antigena is a self-defense product that recognizes and reacts to malicious behavior in real-time. It takes targeted action to neutralize attacks on emails, protecting employees from threats and spear phishing.

The intensity and frequency of cybercrime attacks continue to evolve rapidly with each passing year. And depending on the size of your organization, there are hundreds of signals that need to be analyzed to predict risk accurately.

The process of analysis and improvement of cybersecurity is no longer a human-scale problem. Data mining and AI in cybersecurity are fast-emerging trends that enhance the performance of IT security teams. They give the much-needed threat identification and analysis that security teams can use to minimize breaches and strengthen security posture. If you are interested in this subject, we invite you to read our blog post about big data security issues and challenges. Addepto is an AI consulting company. We specialize in everything AI-related, including cybersecurity matters. Drop us a line for detail!

Grow your businness with machine learning and big data solutions.

Our team of experts will turn your data into business insights.

Data science for business – what problems can be easily solved?

Planning AI or BI project? Get an Estimate

Get a quick estimate of your AI or BI project within 1 business day. Delivered straight to your inbox.

Get weekly news about advanced data solutions and technology